In recent years, questions concerning the fundamental structure of social reality have increasingly received attention within analytic philosophy. Building on the work of theorists such as Raimo Tuomela, John Searle, Michael Bratman and Margaret Gilbert, phenomena such as collective agency, group intentions, institutional facts and constitutive relations between different features of social reality have become the subject of a renewed philosophical debate.

This debate is, on the one hand, closely connected to many of the traditional issues of social theory — for example, the question what role individual intentions play in the explanation of social norms and institutions or questions concerning the importance of relations of power and knowledge for institutional facts, are the subject matter of debates within social ontology as well as of discussions on the foundations of social theory. Critical social theories in particular — whether they approach the issue from a Marxist perspective, within the Frankfurt School tradition or departing from the work of theorists such as Foucault, Butler or others — have many reasons to be concerned with these questions as far as they aim at uncovering normatively problematic general features of institutions, practices and socially enforced norms. The validity of such a form of social critique will, however implicitly, depend on an adequate view of the object domain which it aims to evaluate.
On the other hand, however, debates within analytic social ontology and critical social theory alike are often oblivious of the perspectives and insights provided by the respective other approach. Thus, for example, theories of social facts and collective agency within analytic social ontology tend to focus on cases of consensual activity, rather than on real-world examples of institutions that are characterized by profound inequality and domination. Critical theories, in return, often discuss phenomena of power or of problematic social norms without considering the conceptual distinctions deemed fundamentally important by analytical approaches.

For this reason, one can expect that both analytical social ontology and critical social theory (in the broadest sense of the term) will be able to gain new insights by entering into a dialogue with each other and by sharing the results of their respective research paradigms.
The workshop series Critical Theory and Social Ontology aims to provide a platform for such exchanges to take place. It provides researchers with an opportunity to present current projects, paper ideas or even tentative research questions to an audience consisting of scholars working within the many traditions of critical social theory or within analytical social ontology (or both). 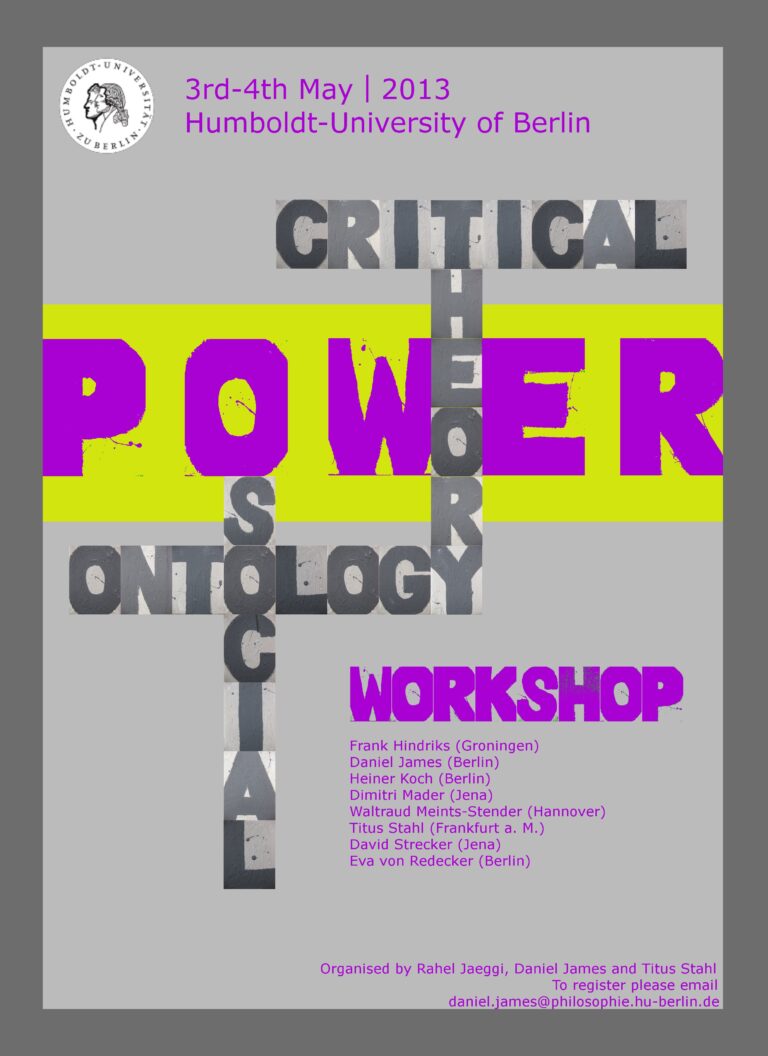