What is “the public”? Who is able and allowed to speak in it? Which issues and which styles of discussion are adequate for public debate? In this workshop with Nancy Fraser, Carolin Wiedemann and Sebastian Sevignani we discussed how to theoretically reconstruct and politically intervene into the contemporary struggle over the public sphere. Hosted by Victor Kempf.

The public sphere finds itself amidst tremendous transformations that have let to struggles regarding its subjects, boundaries, and future form. New technologies have pluralized, but also, as many commentators have noted, polarized, and even brutalized public discussion. While triggered by “social media,” these tendencies are rooted in a deeper conflict regarding the very definition of the public: What is “the public” at all? Who is able and allowed to speak in it? Which issues and which styles of discussion are adequate for public debate?

Those and related question have provoked ongoing struggles between bourgeois versions of “the public” and “subaltern counterpublics” (Nancy Fraser). Whereas feminist, queer, and anti-racist counterpublics saw some successes in widening the circle of public deliberation, we are now faced by a wave of right-wing counterpublics that aggressively try to roll back this very progress.

In this workshop we will ask how to theoretically reconstruct and politically intervene into the contemporary struggle over the public sphere. Which dynamics and interactions are at play in this struggle? Is there a common ground on which this struggle takes place? Or is such a public-at-large itself the object of deeper-laying conflicts? How are those lifeworld conflicts related to the economic, political, and technological transformations that the Habermasian analysis of the “structural transformation of the public sphere” focused on? What insights to these questions can we gain from empirical case studies as well as journalistic and political practices?

Nancy Fraser is the Henry and Louise A. Loeb Professor of Philosophy and Politics at the New School for Social Research. She is a leading critical theorist and socialist feminist whose work over the past forty years has addressed issues of power, identity, emancipation, capital, justice, and oppression, especially in relation to the limits of liberalism. Working with the broad tradition of Foucault, Habermas, and the Frankfurt School, Fraser has focused on structural injustice, with attention to the conceptual and ideological underpinnings that sustain it. Her focus is the critique of capitalism, which she conceives broadly, not as an economic system, but as an institutionalized social order, which harbors multiple forms of oppression and crisis tendencies. She is currently preparing a new book: Cannibal Capitalism. How Our System Is Devouring Democracy, Care, and the Planet and What We Can Do About It (to appear in autumn 2022).

Carolin Wiedemann  is a journalist and sociologist. She writes about gender relations, right-wing populism and digital capitalism.

Sebastian Sevignani teaches and researches as a sociologist at the University of Jena. His work focuses on critical media theory, sociology of communication, the structural transformation of the public sphere, surveillance and privacy, and a critical theory of human needs. His latest book is on „Privacy and Capitalism in the Age of Social Media“. 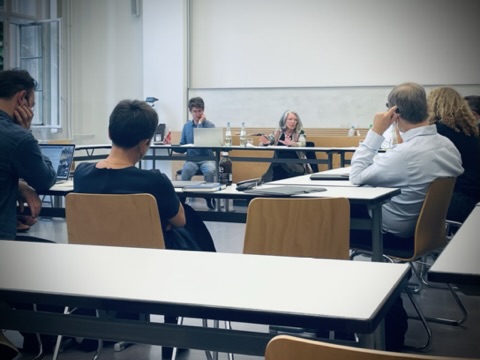