On June 16th, 17th, and 18th, 2021, Axel Honneth gave the Benjamin Lectures on “The Working Sovereign: A Democratic Theory of the Division of Labor”.

One of the greatest shortcomings of almost all theories of democracy is the tendency to repeatedly forget, with a certain stubbornness, that most members of the loudly invoked sovereign are also always working subjects. As much as one might like to imagine that citizens are primarily engaged in actively participating in political debate, this is wrong in social reality; almost all of those we are talking about do paid or unpaid work on a daily basis for many hours at a time, which, due to the effort and duration, makes it impossible for them to even put themselves in the role of a participant in democratic decision-making.

This blind spot of democratic theory precedes its object and yet penetrates it down to its finest capillaries: a social division of labor that arose on the basis of modern capitalism and assigns each member of society a place in the structure of social reproduction, determining his or her scope of influence and options for participation in the process of democratic decision-making. The task of this year’s Benjamin Lectures was to investigate the connection between democracy and the social division of labor. We have examined (I) which normative connection exists between the goal of civic participation in democratic decision-making and social labor, (II) what is the actual distribution of social labor today, and finally, (III) what possibilities seem feasible today for eliminating existing disadvantages.

The lectures were held in German. English subtitles for the video recordings will be added shortly.

Lecture 1: The Labor of Democracy

Lecture 2: The Reality of Social Labor

Lecture 3: A Democratic Politics of Labor

with a Commentary by Andrea Komlosy (Universität Wien)

Impressions from the Benjamin Lectures at Freiluftkino Hasenheide

Axel Honneth is one of the leading social philosophers of our time. His work is closely linked to the Frankfurt tradition of critical theory and has been an important factor in its renewal and ongoing actualization. Concepts of social philosophy such as “recognition” and “social pathologies,” that were only made fruitful for the analysis of contemporary society as a result of Honneth’s work, continue to shape research programs around the world. This is due not least to the fact that Honneth’s social philosophy combines conceptual clarity, brilliantly interpreted concepts of social science and careful observation of social developments together to produce a critical theory of our time. From this historically situated critical theory, Honneth develops normative demands towards contemporary society that take potential of historically developed institutions seriously. Already during his years as director of the Frankfurt Institute for Social Research many research projects there dealt with changes in labor relations broadly speaking, always taking the division of labor within the private household into account. Honneth’s 2005 book Alienation provided a first summary of the conclusions drawn from these research projects. In particular, Honneth emphasized troubling changes in both the social interaction and the self-relation of working people. In his Benjamin Lectures, Honneth will develop a political theory of labor that considers the potential and necessity of democratizing labor relations, while also fundamentally problematizing how we understand labor today.

The Benjamin-Lectures are named after the Berlin-born philosopher Walter Benjamin and dedicated to his intellectual integrity and political commitment in the face of historical catastrophe. Each year, inspired by the Amsterdam Spinoza-lectures as well as the “Adorno-Vorlesungen” in Frankfurt, the Benjamin-Lectures will bring one leading critical theorist to Berlin. His or her public lectures will allow for a broad audience to partake in the latest debates on social and political issues of core concern. Prior to the lectures, the invited speaker will hold the Walter-Benjamin-Chair at the HSC Center Berlin and spend up to three months in close cooperation with the HSC academic community.

Benjamin Lectures 2019: Charles Taylor on "Democracy and its Crises"

In June 2019, the Walter Benjamin Lectures took place for the first time at the Humanities and Social Change Center Berlin at the Humboldt-Universität zu Berlin. The renowned Canadian philosopher Charles Taylor inaugurated the prominent series. On three consecutive evenings, Taylor gave lectures on “Democracy and its Crises”, covering various forms of democratic deterioration, such as political alienation, increasing inequality, xenophobia and polarization, as well as possible ways out of crisis.

Charles Taylor is one of the most important thinkers of our time. His early work on the embeddedness of cognition in the life world alone represents a paradigm shift in the social sciences. Guided by his novel reading of Hegel, Taylor subsequently embarked on an extraordinary research program: to elucidate and overcome the contradictions of modernity in the light of modernity’s own development, drawing out its limitations and imbalances. This project is laid out in two monumental monographs, one on the history of the self and one on secularization. More recently, Taylor has brought the motif of obscured social grounds to bear on questions of democratic politics and has developed a recognition-theory of tolerance. He has traced progressive trajectories, yet also started to analyze how the disavowal of shared values, imaginaries, and social relations unleashed destructive tendencies.

The Benjamin-Lectures advanced these investigations. In Berlin, Taylor proposed a trenchant diagnosis of the contemporarty threats to democratic societies. Moving from crisis to resources for potential remedy, the Lectures assembled an encompassing picture of our time.

You can watch video recordings of Charles Taylor’s lectures. 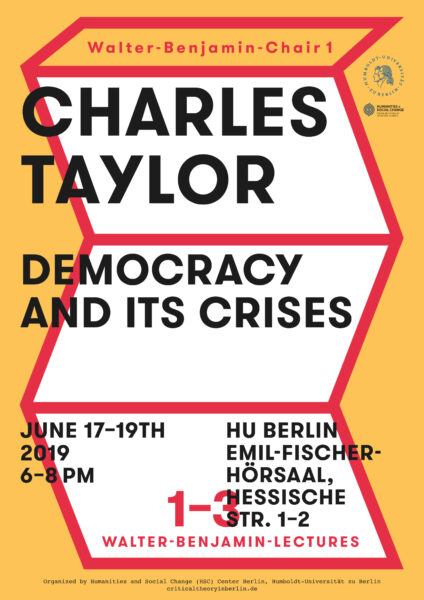 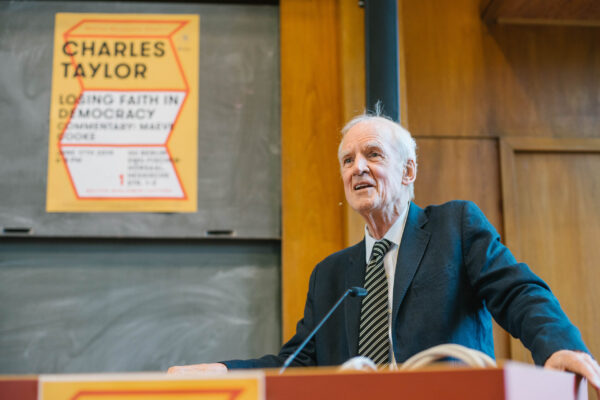 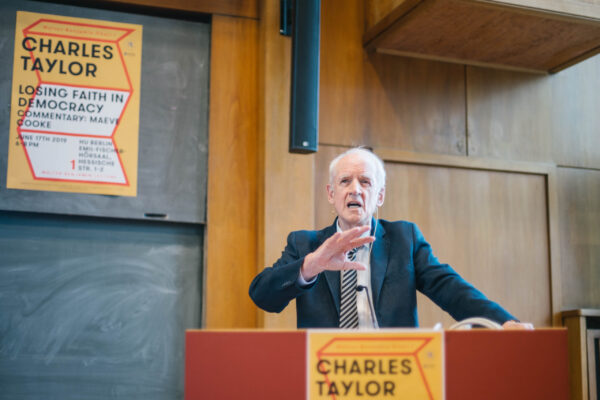 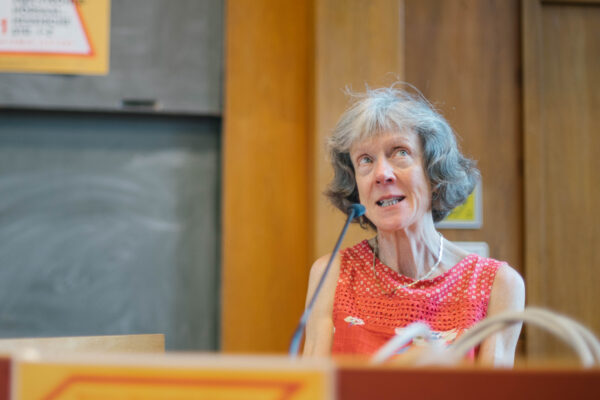 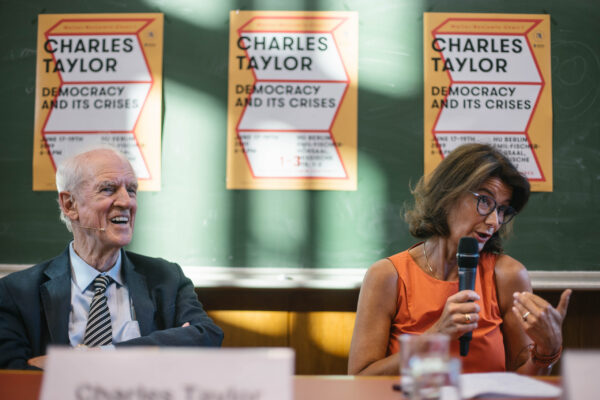 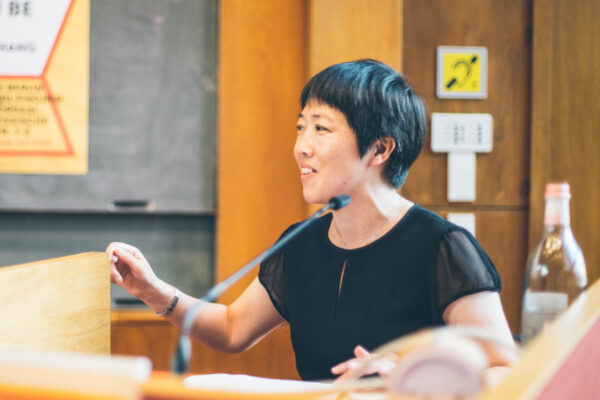 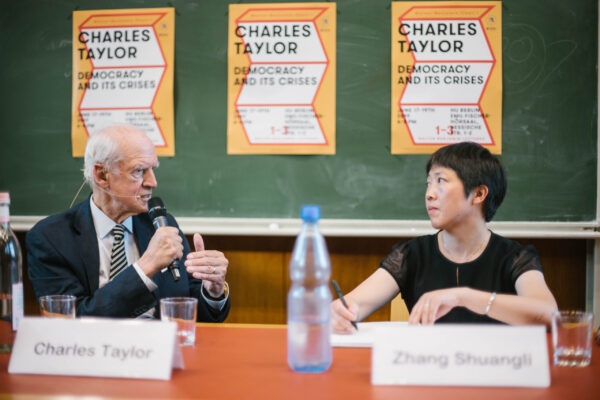 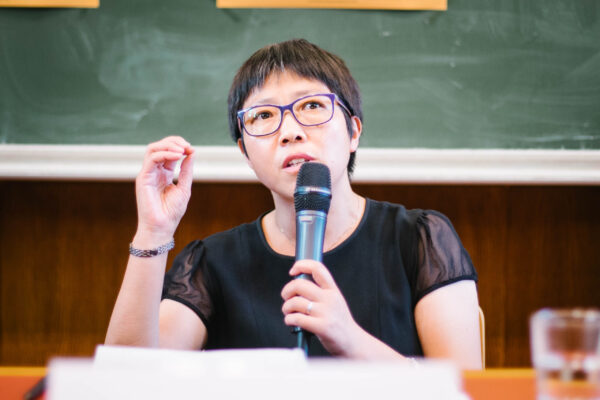 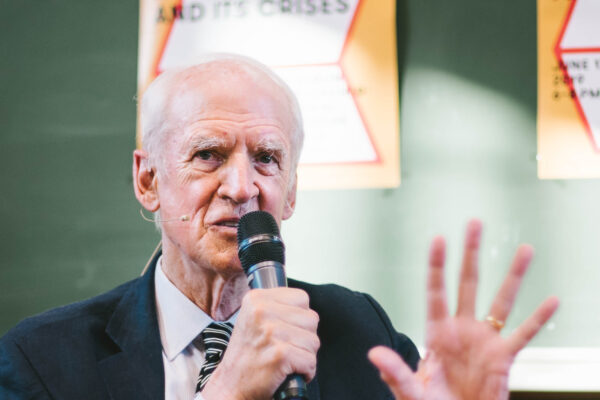 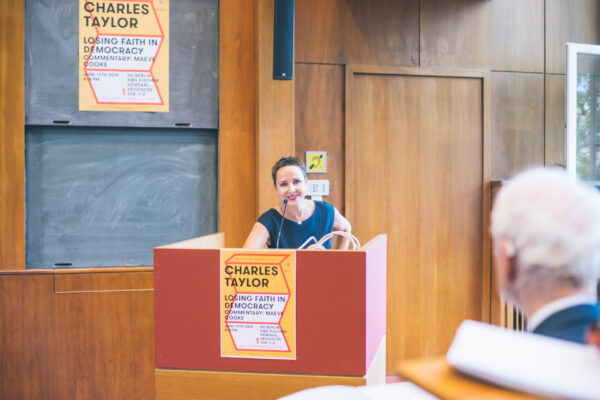 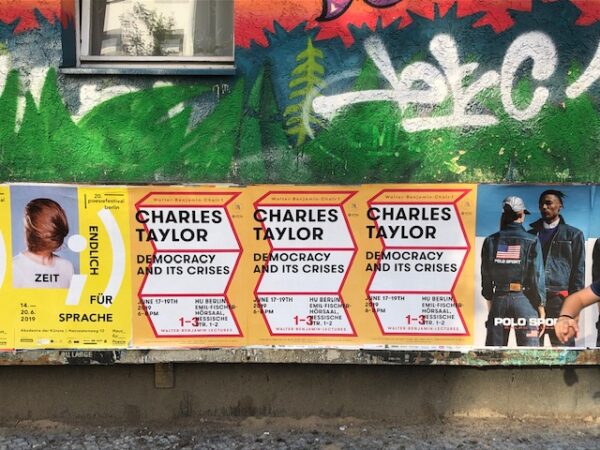 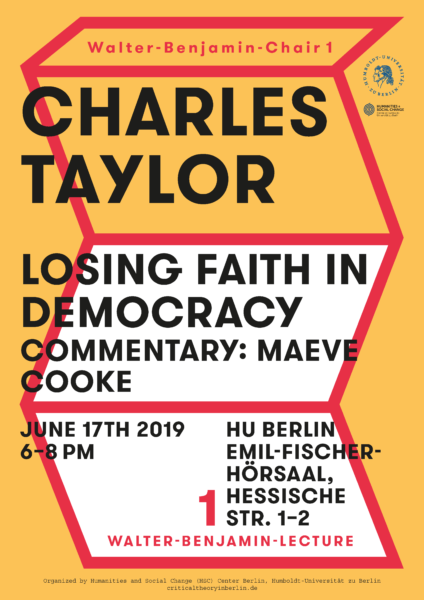 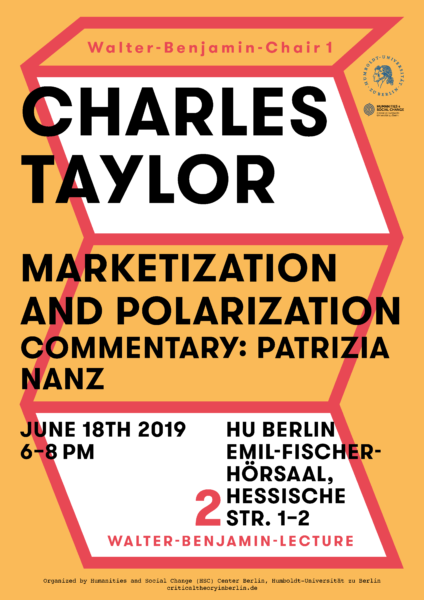 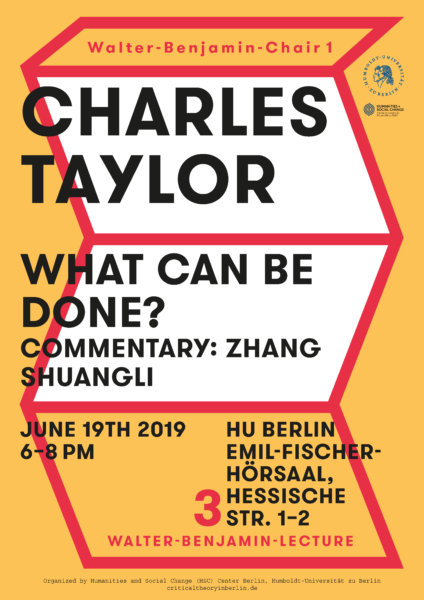 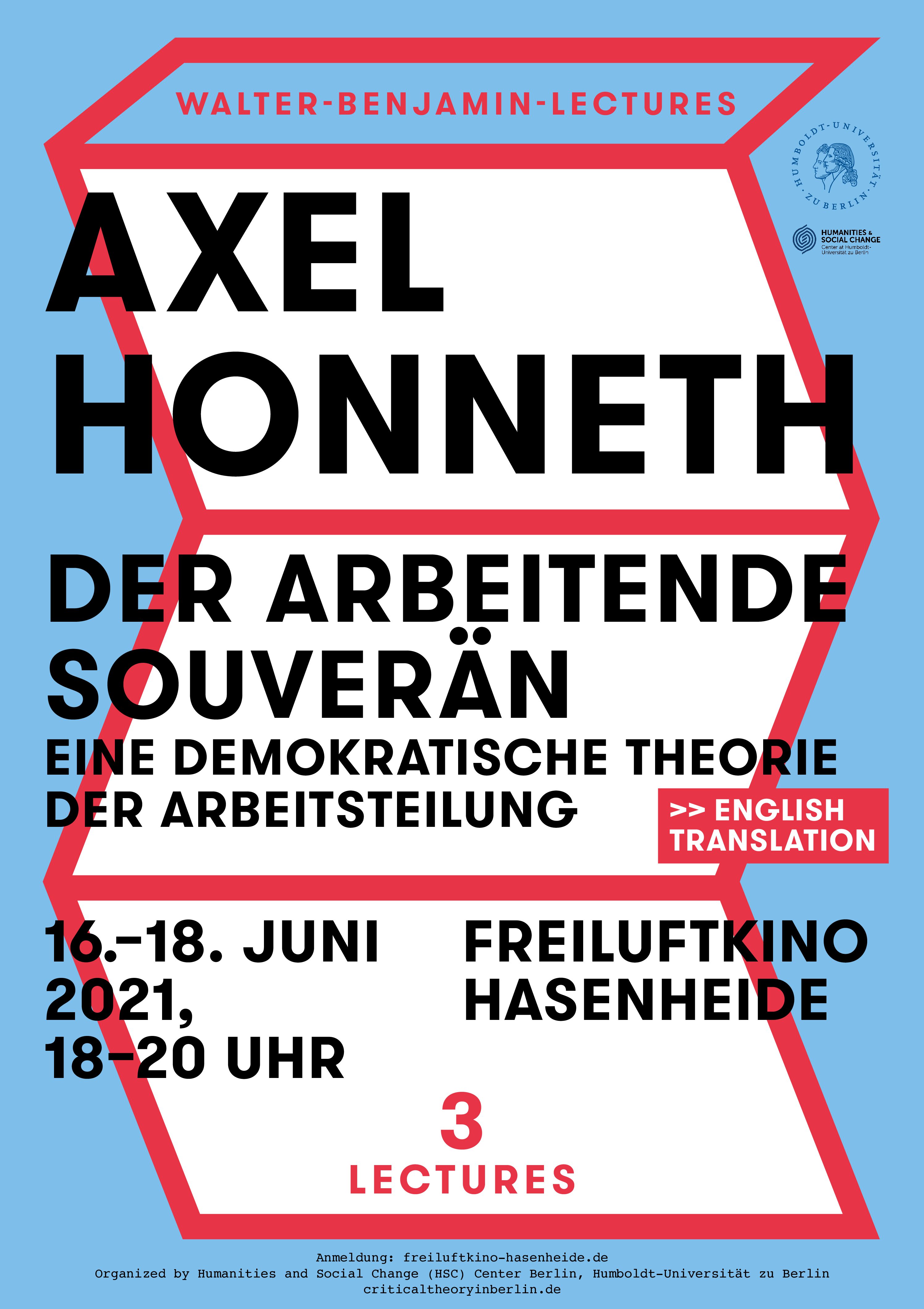